6.1 - What is a reference gene annotation, versioning and where to obtain it

To estimate gene expression, we need to define the genes by identifying their position in the genome. This information is stored in a hierarchical fashion (the genes, their transcripts, each transcript’s exons, and so on…) in formats such as the Generic Feature Format (GFF) files. These consist basically of tabular text files with positions of genes (and their components) in the genome (for a specific genome version), as well as other information about the gene such as its name. Another common format used for annotations is the BED format.

Gene annotations are usually complex to create, particularly for large mammalian genomes, and are a permanent work in progress (even more than the genome). Annotation of the Human genes is the work of several large groups of researchers. Other model organisms (such as the mouse) also have dedicated teams to curate their genes. Non-model organisms that are less intensively studied may suffer from having less well characterized annotations, frequently derived from other better studied organisms.

The same way Ensembl is a good source for the genome sequence, it is also a good source to obtain gene annotations. Ensembl even defined a specific derivative of the GFF format (the GTF format) which is commonly accepted by most applications. Ensembl is updated roughly every three months. If you download the genome and gene annotation from the same ENSEMBL version, then you’re sure to have compatible files, but be aware that in a few months the annotation (or even worse, the genome assembly) may change.

QUESTION:: Upload into Galaxy the sample GTF in the guilgur folder and inspect it (using the eye icon). What’s the first gene described in the GTF?

TASK: Obtain the latest Drosophila melanogaster GTF from Ensembl, similarly as how you obtained the genome fasta file.

Note: Like for the genome sequence, you may see several gtf files in Ensembl. Abinitio genes are inferred insilico, and should be avoided, as they are prone to incorrections. Usually one takes the full gtf, although you can also take the ones associated to chromosomes (excluding unplaced scaffolds or alternative haplotypes).

Note: The gtf in Ensembl contains all genes, including non-coding RNAs, pseudogenes, and many alternative splice transcripts. If you want just protein-coding genes, or a single representative for each gene (like RefSeq), then you may need to get it from places like the UCSC Table Browser. You will need to be sure to use a compatible genome version.

The SAM/BAM file contains all the information on the alignments, but it is not a practical way to visualize them for humans. To visualize the alignments along the reference genome one can use software such as IGV or Tablet, which work with the most common operating systems. To avoid loading all alignments simultaneously in memory, and to be able to quickly search for region-specific alignments, this software uses the BAM format (with indexes). With IGV we can have an overview of the alignments, which is particularly useful if we have specific genes of interest apriori. Usually, though, we use IGV after obtaining the final results, to confirm that certain genes (particularly important for our experiment) are really differentially expressed. 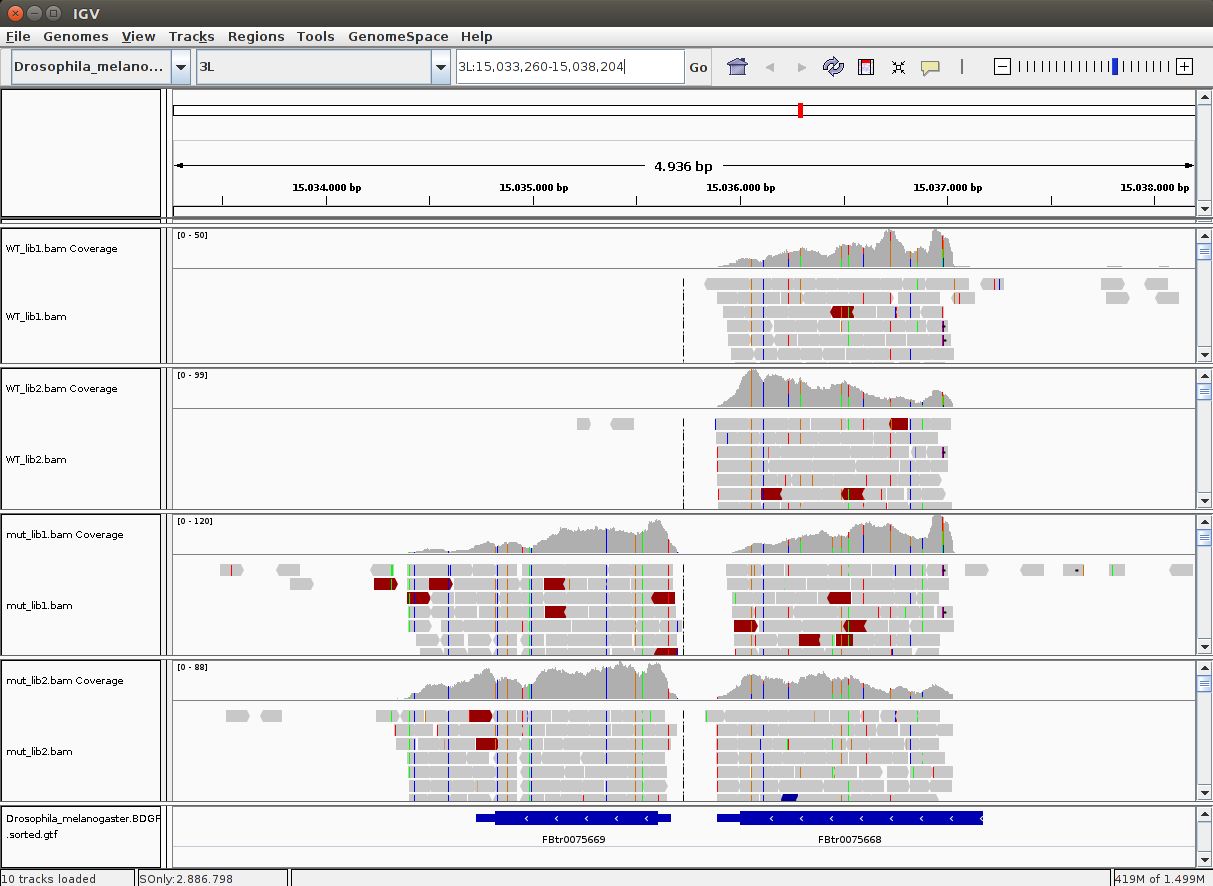 TASK: Download the BAM files you generated for the guilgur dataset in Galaxy

. You also need to download the companion bai index files that accompany each of the BAM files. These bai index files are essential to quickly access alignments inside the BAM file. Run IGV and load the Drosophila genome fasta file as reference (in Genomes, load genome as file). Next load (in File, load file) the provided annotation file (Drosophila_melanogaster.BDGP6.85.sample.gtf - not the one you downloaded from ENSEMBL) inside the guilgur folder which contains information just for a subset of genes. Finally, load the BAM alignment files.

Hint: To run IGV, you can open a terminal, and type igv. It will then take a little bit to start.

QUESTION: For the gene Act5c, expression profile seems to suggests samples are clustered by replicate insted of genotype. What may this be suggesting?

QUESTION: Would you be able to detect all of what you saw here using microarrays? If not, what and why?

6.3 - Assessing the quality of alignments

After generating alignments and obtaining a SAM/BAM file, how do I know if this step went well? In fact, there are potential issues that we can only detect after we try to align against the reference genome.

One important general measure is how many (out of all reads) were properly aligned against the reference genome. In the case of bacterial sequencing one would expect >95% successful alignment, but when sequencing a mamallian genome (with many repetitive areas) it may be normal to have as low as 70-80% alignment success. RNA-Seq sequenced regions that are usually well preserved, and thus alignment rates should usually be high (more than 80-90%).

A low alignment rate may be caused by several reasons: the reads may not have been properly quality filtered or may contain artefactual sequence (such as adaptors and polyA tails); there may be contaminants; or an inappropriate reference genome may have been used for alignment. It can be hard to find out if there were contaminations, unless we have an idea of the possible contaminants. Finally, if we didn’t use the proper genome, but there is no closer genome available, then there is not much that can be done, except perhaps trying to change parameters in the alignment software to allow for more mismatches (although this may cause biases and an increase in wrong alignments).

Another measure that can be used is the percentage of reads with duplicates (aligning exactly to the same place in the genome). Usually, duplication levels higher than 20% are not a good sign (they’re a sign of low amount of sample and PCR artifacts) but again, depends on what you are sequencing and how much. In RNA-Seq it is common to have a small set of genes highly expressed, leading to the presence of duplicates. The histogram of number of duplicates per read will often look bimodal, with most reads being unique and a small subset highly duplicate (mostly from highly expressed genes). Unfortunately it is hard to distinguish PCR artifacts from highly expressed genes. When looking in IGV, PCR artifacts can be easily detected by an uneven coverage of the gene, and the presence of large stacks of duplicated reads. To be safer, one can remove duplicates, but this is not usually done in RNA-Seq, since a lot of valid information may be lost.

Note: One way of checking is to plot the number of duplicate reads by gene. If even low expressed genes have a lot of duplicated reads, then this is a sign that your sample may have problems, and you may need to try to remove duplicates.

There are reports specific for RNA-Seq which depend on gene annotation. One report indicates how well the genes are covered by sequence, which provides a good indication of RNA integrity. One can also check how well the alignments match the known annotation. The presence of a lot of alignments outside annotated genes can mean several things: annotation is not correct (eg. if you’re working with a non-model organism); there can be DNA contamination (homogeneous presence of reads in both introns and intergenic); or presence of immature RNA (more intronic, less intergenic). 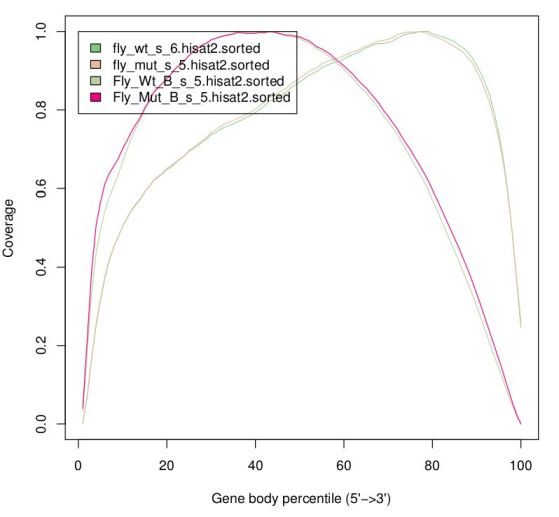 The same way FastQC generates reports of fastq files to assess quality of raw data, there are programs that generate global reports on the quality of BAM alignments. One popular tool for this is qualimap.

TASK: In the command line, type qualimap. There may be some warnings about missing packages, don’t worry about those. From the Qualimap GUI, produce Rna-seq reports (File>New Analysis>RNA Seq QC) using the BAM files of the guilgur dataset. You’ll need to use the example gtf file as an annotation.

QUESTION: What information is in a Qualimap RNA-Seq report?

QUESTION: Can you see differences in the Qualimap reports of the different samples?

TASK: Run qualimap using the command line, using the command:qualimap rnaseq -bam mut_lib1_R1.bam -gtf Drosophila_melanogaster.BGP6.85.sample.gtf (you may need to adjust the file names and locations). You should see a new folder created, containing the qualimap report in html format.