Results of Sanger sequencing are usually fasta files (obtained from processing chromatograms). Most high-throughput sequencing machines output fastq files, the “de facto” current standard in HTS. Like fasta, fastq files are simply text files, but where each block of information (a sequenced DNA fragment, or read) in this format is encoded as 4 lines:

For example, here you have 8 lines of a fastq file, corresponding to 2 sequences:

Each base has a quality character associated with it, representing how confidently the machine identified (called) the base. The probability of error per base is given as a Phred score, calculated from an integer value (Q) derived from the quality character associated to the base. The probability of error is given by the Phred score using P(Q)=10^(-Q/10). Useful reference values of Q include:

Although there’s theoretically no limit, Q usually goes up to around 40 in recent illumina machines.

To obtain this Q value from the character associated to the quality of the base, we have to know that each character (such as ‘#’) has an ASCII decimal value associated (for example, ‘#’ has a value of 35). The Q value of a character is the decimal value corresponding to the entry of that character in the ASCII table, subtracted by 33. For example Q(‘#’) = 35 – 33.

NOTE: To understand why we need to subtract 33, we have to look into the ASCII table below. We can see that the first visible character (‘!’) has decimal value 33. This allows visual inspection of qualities. 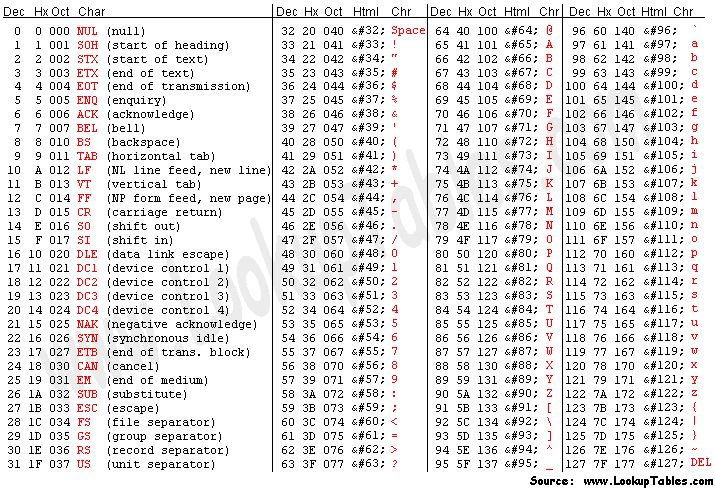 Looking at the first read of our fastq example, we can see it starts with ‘N’ (unknown), with an associated quality character ‘#’. To know how confident the machine was in reading that base, we calculate:

Given this probability of error, it is not surprising that the machine could not confidently say which base was in that position and therefore placed an ‘N’ in that position. It is fairly common that in the first bases the machine is still calibrating, and sometimes there is less confidence in the called base.

TASK: Calculate the probability of error of the bases of the following read in the fastq format:

NOTE: Phred+33 (Sanger fastq) is the current standard format. Nonetheless, with older illumina data (before 2009) preferred to start at the character ‘@’ (ASCII: 64) instead of ‘!’. This Phred+64 format is the old illumina fastq. Some tools (like FastQC) can infer the format, while in others you need to specify.

QUESTION: What is the probability of error of the first base of the read?

QUESTION: What is the probability of error of the last base of the read?

QUESTION: If all bases of a ficticious machine had a Q=20 (1% probability of error), what would be the probability that one 100bp read from that machine would be completely correct?

QUESTION: Inside the folder fastq_examples you can see several compressed fastq files. Uncompress the fastq files paired_end_example_1.fastq.gz and paired_end_example_2.fastq.gz that are in the folder fastq_examples (either by clicking on the files, or using gunzip on the command line). Open the uncompressed fastq files using any text editor (eg. kate). Can you see a relationship between the reads in both files?

High Throughput Sequencing machines read thousands or millions of sequences in parallel. As you can imagine, this usually generates large fastq files, with millions of lines. Manually inspecting the quality of each read is out of the question. Specialized software has been developed to provide quality measures for fastq files generated by HTS machines. FastQC is a popular program to generate quality reports on fastq data. In fact, this is usually the first thing you should do once you receive a new dataset. FastQC reports provide a series of plots that allow the user to assess the overall quality of their raw data and detect potential biases and problems.

Other plots indicate biases in nucleotidic content of reads, either globally (such as %GC plots), or positionally. Global bias in nucleotidic content can be useful to search for signs of contaminants. On the other hand, positional bias are useful to detect presence of artefactual sequences in your reads such as adaptors. Another insight you may obtain from this information are potential biases in the preparation of your library. For example, random hexamer priming is actually not truly random and preferentially selects certain sequences. The currently popular transposase-based enzymatic protocol, although reasonably random, is also not completely random, and you can see this through positional bias, particularly in the beginning of reads. The presence of adaptors is a relatively common event, and therefore specific plots exist to detect the presence of the most commonly used adaptors. Finally, the presence of repetitive sequences can also suggest contaminants, PCR artifacts, or other types of bias.

NOTE: Given the size of fastq files (usually in the order of Gb), they are most frequently compressed as fastq.gz files. In fact, most tools (such as FastQC) work directly with fastq.gz to reduce space.

TASK: Open a terminal. Type fastqc and press enter. The graphical interface of FastQC should appear. Open the file MiSeq_76bp.fastq.gz inside of the folder fastq_examples. Look at the different plots you obtained. Next, open the file MiSeq_250bp.fastq.gz.

QUESTION: What information is in a FastQC report?

QUESTION: What are the main differences between the reports of both fastq files?

Inside the folder, you should now see a series of HTML files with FastQC reports of each of the fastq files. You can open them with the web browser by clicking on them with the mouse, or by running: firefox *.html

QUESTION: Can you see differences between the different sequencing technologies?

QUESTION: What is the major difference between the two paired fastq files of the paired_example?

TASK: Manually remove the bases with Q<30 from the 3’ end of the read you analysed before.

QUESTION: How is the read after this trimming operation?

QUESTION: Did you remove all lower quality bases from the read? What other strategies you can imagine to filter your reads?

QUESTION: Can you remove bases in the middle of reads? Why?

Like you have FastQC to automatically produce plots from fastq files, you also have software to filter low-quality bases from fastq files. Seqtk is a very simple tool that you can use to perform this filtering.

QUESTION: What is this command doing? Use fastQC to check the new fastq file that is created by this command.

Most software for the analysis of HTS data is freely available to users. Nonetheless, they often require the use of the command line in a Unix-like environment (seqtk is one such case). User-friendly desktop software such as CLC or Ugene is available, but given the quick pace of development in this area, they are constantly outdated. Moreover, even with better algorithms, HTS analysis must often be run in external servers due to the heavy computational requirements. One popular tool is Galaxy, which allows even non-expert users to execute many different HTS analysis programs through a simple web interface.

TASK: Let’s use Galaxy to run some bioinformatic tools. Open the web browser (eg. Firefox). Type localhost:8080 in the URL tab (where you put the web addresses). This means that you are accessing a galaxy instance that is running on your local machine. You should see the Galaxy interface on your web browser. Click on the upload icon on the top left of the interface. Upload into Galaxy the files MiSeq_76bp.fastq.gz and MiSeq_250bp.fastq.gz. You should now seem them on your history in the right panel. You can visualize their content by pressing the view data icon (the eye icon). After you have your data, you’re ready to run some tools on your data. The tools are listed on the left panel. Search for fastqc on the tool search bar on the left panel. By clicking on the tool you should have in the middle the interface to run fastQC. To run fastc you just need to select the fastq file and press “Execute”. Run fastqc on the fastq files you uploaded and see the result. Still in galaxy again, search for and run “seqtk trimfq” on the file MiSeq_250bp.fastq with the same parameters as you used in the command line.

As we saw before, sequencing machines (namely, the illumina ones) require that you add specific sequences (adaptors) to your DNA so that it can be sequenced. For many different reasons, such sequences may end up in your read, and you need to remove these artifacts from your sequences.

QUESTION: How can adaptors appear in your sequences? Take the sample MiSeq_76bp.fastq.gz as an example.

There are many programs to remove adaptors from your sequences, such as cutadapt. To use them you need to know the adaptors that were used in your library preparation (eg. Illumina TruSeq). For this, you need to ask the sequencing center that generated your data.

TASK: In Galaxy, use cutadapt to remove adaptors from MiSeq_76bp.fastq.gz. In this sample, we know that we used the illumina adaptor GTGACTGGAGTTCAGACGTGTGCTCTTCCGATCT, so try to remove this from the 3’ end of reads and see the impact of the procedure using FastQC. For this, you need to insert a new adapter in 3’, and in the source, select “Enter a custom sequence” (you don’t need to add a name, just paste the sequence).

QUESTION: What happened? To answer, look at the report from cutadapt, and use FastQC on the fastq that is output by cutadapt.

Trimmomatic is a tool that performs both trimming of low-quality reads, as well as adaptor removal. Moreover, it already contains a library of commonly used adaptors, so you don’t need to know their sequence. Similar to FastQC, it is a java program, so you can use it in any operating system (such as Windows and Mac), although unlike FastQC it needs to be run only using the command line.

QUESTION: Find and select the Trimmomatic tool in Galaxy. What different operations can you perform with Trimmomatic that use the base quality information?

TASK: Let’s use Trimmomatic in Galaxy to remove low-quality bases from MiSeq_250bp.fastq.gz, as well as the remainings of illumina Nextera adaptors that are still left in some of the reads. Now Trimmomatic should find it. Let’s perform the default operation “SLIDINGWINDOW” of size 4 and average quality 20, and then also the operation “MINLEN” using 36 as the minimum length. Let’s also remove the adaptors. For this, select ‘Yes’ on ‘Perform initial ILLUMINACLIP step’. Then select “Nextera (paired-end)” and leave the rest of the parameters as they were. Finally, click on Execute.

QUESTION: What happened? To answer, use FastQC on the fastq output by Trimmomatic.

QUESTION: Now, you get 4 files as output from Trimmomatic. Can you explain what these are?

QUESTION: From the “isolated” reads resulting from Trimmomatic, which one has more reads? Why is that?

NOTE: Turn on the green light when you’re finished. Assess how well you achieve the learning outcome. For this, see how well you responded to the different questions during the activities and also make the following questions to yourself.